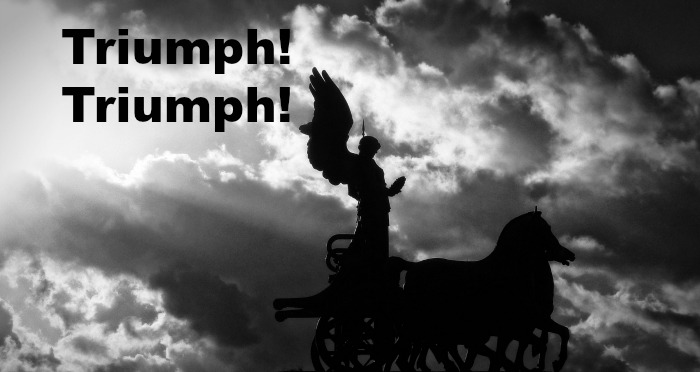 Over the weekend, I was fortunate to be given the opportunity to share at a local church women’s breakfast. The following is an excerpt from the notes of the talk I gave on 2 Corinthians 2:14-16.

Did any of you watch the Rio Olympics recently? I am not a huge sport person and only saw highlight snippets of the Olympics here and there, but what I really wanted to see was the Opening and Closing ceremonies. There is something about seeing the Aussie athletes walking proudly behind the Australian flag that gets me feeling pretty patriotic. The athletes’ walk proudly behind their flag, full of expectation at what is to begin. There is such pride and beauty and hope on their faces. Did you know that back in Ancient Greece, where the Olympics come from, they used to have a similar procession- where a festival would take place as the opening to the games and then an artistic competition of trumpeters and would conclude the opening festivities and began the Olympic competitions?

The Ancient Civilizations were actually pretty good all around at processions- the Romans had another procession that Paul writes of in 2 Corinthians 2:14-16:

Here, Paul is referring to a Victor’s procession. What use to happen was that a Roman general would have a procession called a ‘Triumph’, which was the highest honour paid to a Roman General. To qualify for this, a General had to have been the leader in battle, he had to have extended Roman territory and he must have defeated a foreign threat, so you can imagine a Triumph didn’t happen very often. And when they did happen, they were a bit of a dig deal.

Now, this procession was pretty spectacular. First in the procession came all the politicians, then the trumpeters, then any special spoils of war, then came paintings done of the conquered area, and models of the conquered ships, then a white bull to be sacrificed to the gods, then came any captives, including rulers who had been taken captive and they were all in chains, then came people who beat the captives, then the musicians, then the priests waving incense then, after all of this hoo-ha, there came the general. Now he had a four horse chariot, he was dressed in purple, he then had a sceptre and crown. And then, in case anyone missed what was happening, the army followed shouting out ‘triumph’ ‘triumph’. They then walked around the city through all the streets and celebrated. In this environment, there wouldn’t have been a soldier in the army looking downcast. “Oh dear, we won again.” No. They would have been screaming out “Triumph! Triumph!”

So, when Paul says in verse 14, “But thanks be to God, who in Christ leads us in triumphal procession”, we know that he means, here is Christ, who is the Triumphant General. Like the priests holding the incense, we spread the knowledge of him everywhere.

But we aren’t just an aroma about Jesus to those around us, we are the aroma to God. My daughter loves to watch me getting ready and often she likes to have a spray of whatever perfume I put on. It is a fragrance that reminds her of watching her mummy. So, we get to be a sweet fragrance to God, reminding Him of Jesus. We can delight God as we remind Him of Jesus! What an amazing thought- the God who created the whole earth just through his words, who put a baby in Sarah’s post-menopausal womb. The God who sees the heart of the prostitute Rahab and invites her in to become one of His people. The God who speaks and parts massive seas,. The God who knew His people needed a rescuer so placed His Son in a teenager’s virgin womb. This same God, looks on us and is pleased with us, when we remind him of this Son, Jesus.

How are you at sport? Are you a fairly sporty type or someone who prefers to sit on the sideline and cheer? I am more of the cheering type. Back when I was at school, I wasn’t the person usually chosen first in a sporting team. If it was a game of soccer, my dear friend Ngaire was chosen- she was fast, she was fierce, she played rep soccer, she knew what she was doing. You wanted to be on her team if you could. Within a soccer game, there was always a winning team (like Ngaire’s) or a losing team (often the one I ended up on).

In a similar way, here Paul speaks of two teams. There are those who are saved and there are those who are perishing. The one’s who are saved belong to Team Jesus. They are the army following after Jesus shouting out “Triumph! Triumph!” They are victorious. They enjoy the blessing of being led by the triumphant General and cheer each other on- they are a fragrance from life to life. These are the people who belong through membership to Team Jesus and then revitalise each other through spurring one another on with  “Triumph! Triumph! We follow a triumphant King!”

But the other side are the captives; they are perishing. To them, the aroma of Jesus’ triumphant procession is the smell of death. They don’t belong to Team Jesus and instead are in shackles realising they are heading to death.

Sometimes, the term ‘battle’ sounds so fierce. But it is true, we are in a battle. This is a battle of our soul- who we are and who we belong to. Jesus or no Jesus.

You see, right back at the beginning of the world, back in Eden, we were created with eyes looking up to God. We served him and life was perfect. But then a slimy snake slips in a screws everything up majorly. Satan twists our relationship with God, whispering lies into our ears. Instead of us looking at God, we start thinking, hmm maybe we are missing out. Maybe following God isn’t really what we want. So our head slips down to our navel and we start selfishly pursuing our own desires. We think things out in the world start looking pretty good- sex, the need to be loved, beauty, a low reading on the scales, a pretty house with the latest designer wears, gym posts on Facebook, a great job, a perfect looking family, a comfortable retirement. These are things that captivate us.

The Bible tells us this selfish ruling of ourselves leads to one thing- death. It isn’t team Jesus. It is team self. We are now under this curse of death because our parents were under it and their parents beforehand. My beautiful 4 month old daughter is born selfish simply because she has Dave and me as her parents.

But God, in his love and mercy, realised we messed things up majorly, so came has a God-man- fully man, fully God in the person of Jesus. He died the death we were meant to. He then gives us a second chance to change where we are looking, to look up to the Cross where he hung and died and recognise it is our self-centredness that put him there. Then, just as He rose again our conquering general and king, so too we can follow him. One day each of us will die, but then we will rise and be with Jesus. Seeing clearly just how deceptive all the whispers of the world are. Here, Paul tells us that if we have looked to Jesus as our conquering King, we can be alive now and remind each other that one day, we will have eternal life with our conquering King.

The other team though. The team of self, smells the aroma of Christ now through hearing this good news and harden themselves. The world looks too good. The truth of Jesus becomes irritating to them. Like a bad smell of death or decay. “Don’t try and tell me I am self-centred and sinful. Don’t tell me that I’m dying”. Like a patient who has been given a diagnosis of terminal cancer but ignores it, this person continues living as if the Bible isn’t real, there isn’t such a thing as sin. Yet the cancer of sin is weaving its way through their bodies. One day, Jesus will return in his triumphal procession. He will know who belongs to his army and who are captives he is sentencing to death. This will happen when Jesus returns or when each one of us dies. We don’t know when, we just know it will happen.

Or, are you a member of the army forgetting the triumphant general we are following? Are you forgetting that we are serving and celebrating a conquering general and so remain tight-lipped, scoff your feet, appear downcast? Are you forgetting what a wonderful privilege we have to bring a beautiful aroma of Christ to God by sharing the truth of Jesus? So often, we act as if we would prefer to be a captive by forgetting the reality that Jesus has defeated Satan and one day is going to return triumphant. Is your life showing this reality? That you are a member of the army of the triumphant King Jesus? What you do, what you say, what you spend your money on- are they all pointing to the fact you are part of Team Jesus?

Or are you a third sort of person- are you bound by the whispers of the world? Do you look at the Cross of Jesus and scoff? Do you see his scarred body and hurl insults? Is the truth of God’s word making you feel a bit uncomfortable or hot under the collar today? Let me plead with you today. Stop. You are heading on a one-way street to death. Heed these words of mine and the beautiful people here today and recognise you are on the wrong team.

It’s All About Jesus

I love the story of an unnamed woman in the Bible who is outcast because of her promiscuity, she has had a number of husbands and then moves in with a man who she isn’t married to. She is shunned, outcast. She has to go to a well to draw water in the heat of the day because the women gossip about her. But one day, as she sets off she has a divine meeting with Jesus. He talks to her, invites her in to conversation and then he calls her out to a new life. This is out King. We bring our stuff, He saves us, He cleans us and He makes all things new. This is our God! With Jesus as our conquering King, we are on the winning team, we are calling out “Triumph!” and we are a sweet aroma to God as we share the knowledge of him with those around us.

Whatever my circumstance, whatever yours. When I am floating on cloud-9 or when I’m having a bad day and spending it down in the dumps. His grace- His undeserved favour is enough. He doesn’t run out of the ability to offer me His grace- this grace is sufficient. We even named our daughter here today Imogen Grace which means woman of grace just in case we ever forgot how precious this gift from God is. Let us encourage one another today confident our King has conquered and live aware of the marvellous grace and blessing of life that we get to partake in as a member of Team Jesus.