Reflections on Luke: What Kind of Disciple Are You? 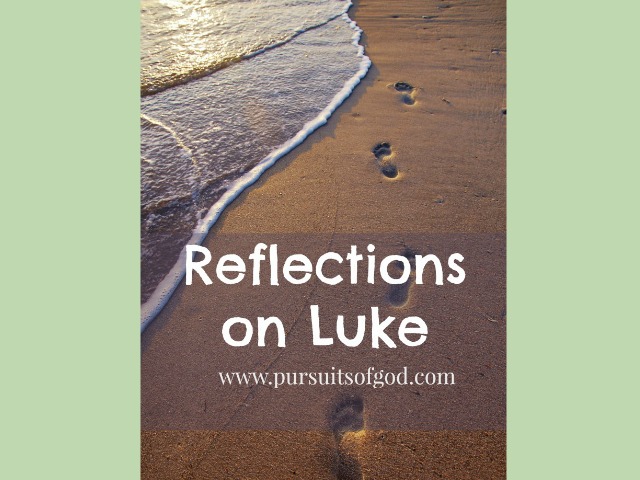 I love watching children. I think their behaviours show us so much about the raw human state; before they have learnt to cover up their foibles and less appealing parts of their personalities, they wear everything out in the open- emotions on their sleeves and will at the centre of their world. My children are no different and as their mother, I get a first-hand look at their developmental stages. Over the past few weeks, my little guy has learnt to purse his lips when he isn’t happy. If I have asked him to do something that he isn’t happy with, his lips very quickly form a definite pout. In his face of chubby cheeks, this is both humorous and slightly frustrating.

In Luke Chapter 7, we read of four different types of disciples in the crowds who follow Jesus. Each one demonstrates an element of human nature- the sinful woman, the lip-pouting pharisee, the crowds chasing signs and wonders and the centurion of great faith.

The Sinful Woman and the Lip-Pouting Pharisee

I am the first to say the poor Pharisees’ get a fairly bad wrap. Unfortunately, throughout the gospels, they bring it on themselves as they keep doing things that cause Jesus to publicly rebuke them. In Luke 7:36-50, we read of a Pharisee who invited Jesus to dinner. At first I was filled with hope- perhaps this is a Pharisee who knows the Scriptures AND recognises Jesus as Lord and Saviour (there are a few of them!) To no avail- here Jesus is reclining at the table, eating his meal when a sinful woman enters the picture. In this era, Jesus would have been resting his arms on the table with his feet facing outward “like spokes from a hub” (ESV Study Bible notes, p.1967). We read:

And behold, a woman of the city, who was a sinner, when she learned that he [Jesus] was reclining at table in the Pharisee’s house, brought an alabaster flask of ointment, and standing behind him at his feet, weeping, she began to wet his feet with her tears and wiped them with the hair of her head and kissed his feet and anointed them with the ointment.

This is a beautiful picture of humility in face of the Saviour. A sinful woman, enters the home and washes Jesus’ feet with her tears and anoints them with expensive ointment. Similar to the later story of Mary of Bethany (as in Mary and Martha), this alabaster flask would have needed to be completely broken in order to allow the contents to spill out. It isn’t like today when we can have a little spray of perfume- the whole jar would have had to be used. Yet this sinful woman, recognises who she is in light of Jesus; “Her tears are both tears of thankfulness and also of reverent awe as she senses the presence of God in the person of Jesus. Her act would have been considered improper, therefore it took great courage to honor Jesus in this way” (ESV Study Bible note, p.1967).

The Pharisee’s reaction? Get ready for a good dose of lip-pouting:

Now when the Pharisee who had invited him saw this, he said to himself, “If this man were a prophet, he would have known who and what sort of woman this is who is touching him, for she is a sinner.” And Jesus answering said to him, “Simon, I have something to say to you.” And he answered, “Say it, Teacher.”

“A certain moneylender had two debtors. One owned five hundred denarii, and the other fifty. When they could not pay, he cancelled the debt of both. Now which of them will love him more?” Simon answered, “The one, I suppose, for whom he cancelled the larger debt.” And he said to him, “You have judged rightly.” Then turning toward the woman he said to Simon, “Do you see this woman? I entered your house; you gave me no water for my feet, but she has wet my feet with her tears and wiped them with her hair. You gave me no kiss, but from the time I came in she has not ceased to kiss my feet. You did not anoint my hear with oil, but she has anointed my feet with ointment. Therefore I tell you, her sins, which are many, are forgiven- for she loved much. But he who is forgiven little, loves little.”

Here, these two personalities show us two reactions to Jesus: the sinful woman recognised her sin and need for forgiveness and grace, while the lip-pouting Pharisee found propriety and self-standing more important than humbling recognising God was sitting at his dinner table.

The Crowds Seeking Signs and Wonders

Throughout the beginning of the book of Luke, we see crowds following Jesus and marvelling at the signs and wonders He performed. In Luke 7:11, we read “Soon afterward he went to a town called Nain, and his disciples and a great crowd went with him…” This crowd had gone by the time Jesus loses His fame. They followed Him around, delighting in what they were seeing and often responded with the right reaction of glorifying God (Luke 7:16-17). Yet the majority of them came wanting their sick healed, wanting their demons cast out, wanting what Jesus could give them. But they didn’t HEAR what He was saying. They came for the remedy to their ailment but not for the true diagnosis. Faith and understanding was so often missing and so the crowds quickly dispersed when Jesus’ popularity declined. I often wonder in the age of Facebook what Jesus’ stats would have been doing- at times, there would have been great chatter, but quickly I think His ‘likes’ would have turned to ‘dislikes’ and the chatter would have faded. Do we ever come to Jesus for what He can give us, instead of for Who He is?

The Centurion of Great Faith

In Luke, 7:1-10, we read of the Centurion (a Roman officer) with a sick servant. Now this servant was very valuable to the Centurion and he was knocking on death’s door.

When the centurion heard about Jesus, he sent to him elders of the Jews, asking him to come and heal his servant. And when they came to Jesus, they pleaded with him earnestly, saying, “He is worthy to have you do this for him, for he loves our nation, and he is the one who built us out synagogue.” And Jesus went with them.

Here, the people sent on behalf of the Centurion, whip out his credentials, telling Jesus just why he deserves his servant to be healed. But, the Centurion thinks differently about himself,

…When he [Jesus] was not far from the house, the centurion set friends, saying to him, “Lord, do not trouble yourself, for I am not worthy to have you come under my roof. Therefore I did not presume to come to you. But say the word, and let my servant be healed. For I too am a man set under authority, with soldiers under me: and I say to one, ‘Go,’ and he goes; and to another, ‘Come,’ and he comes; and to my servant, ‘Do this,’ and he does it.

This Centurion is a Roman leader held in great esteem by the Jews, so much so that they don’t like seeing him upset at the death of a servant, and so they go to Jesus and plead with Him to come. Yet the Centurion, humbling himself before Jesus, feels that there is nothing in himself that should entice Jesus to come. Rather, he asks Jesus to simply speak the words so as to inconvenience Him any longer. This Centurion lays aside any worldly notion of status and instead come humbly.

When Jesus heard these things, he marveled at him, and turning to the crowd that followed him, said, “I tell you, not even in Israel have I found such faith.” And when those who had been sent returned to the house, they found the servant well.

Such a range of human responses when confronted with the reality of the God-Man Jesus! It is a challenge- so often my response can change depending on my circumstances. Yet it is my prayer that the Grace of God would so seep into my heart and the core of my being, that my response would be humbly recognising my unworthiness and need for our great Saviour. In a culture that embraces accolades and status, to simply be ‘Emily- a servant of Christ,’ is what I want to desire. May money nor social propriety be an issue like the Sinful Woman, may social status not be an issue like the Centurion and may knowledge and pride, unlike the Pharisee, not prevent me from coming before my Saviour recognising my daily need and reliance on Him.