Symbols of Christmas: The Lowly Manger 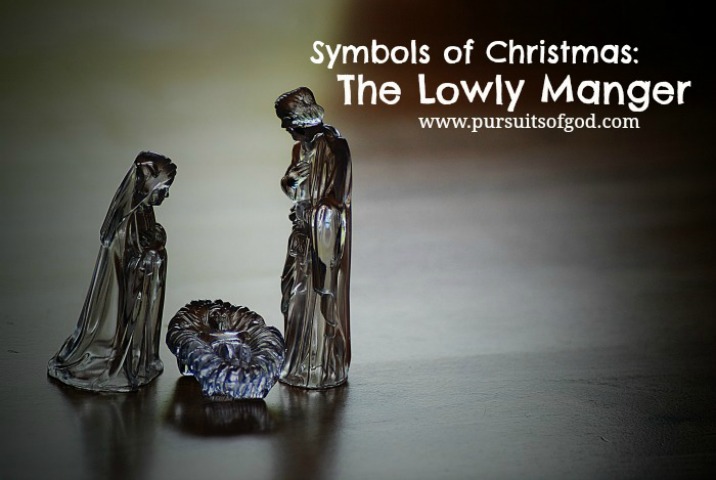 Away in a manger, no crib for a bed,

From the Methodist Hymn, “Away in a Manger”,  Writer: Unknown, Music: James R. Murray

The image of the manger, as depicted in Christmas carols like “Away in a Manger” (writer unknown, musician James. R. Murray) seem to paint this serene picture of a beautiful, peaceful babe nestled amongst soft hay in a clean wooden bed. As I think of what animals are like (and I admit, I’m not overly an animal-loving person), I think of their smell, their noise and the associated bi-products of animals; ‘serene’ would not be my word to describe it. In Luke 2:6-7 we read:

“And while they were there, the time came for her to give birth. 7 And she gave birth to her firstborn son and wrapped him in swaddling cloths and laid him in a manger, because there was no place for them in the inn.”

And these verses make me wonder- doesn’t it seem odd to you that the God who created giant mountains and valleys, flung stars into space and created galaxies at the opening of His mouth, would choose a smelly, animal-laden stable with a simple feeding trough as a bed for His Son? Why?

Almost everything about Jesus’ life and birth was humble. This was God’s plan from the start. Years earlier, Isaiah had prophesied

“Who has believed our report? and to whom is the arm of the Lord revealed? 2 For he shall grow up before him as a tender plant, and as a root out of a dry ground: he hath no form nor comeliness; and when we shall see him, there is no beauty that we should desire him. 3 He is despised and rejected of men; a man of sorrows, and acquainted with grief: and we hid as it were our faces from him; he was despised, and we esteemed him not. 4 Surely he hath borne our griefs, and carried our sorrows: yet we did esteem him stricken, smitten of God, and afflicted.” -Isaiah 53:1-4

Jesus was not attractive and there was nothing about Him physically that made people drawn to Him. He was from Nazareth in Galilee (a region that was looked down on) and trained in carpentry. He was born to a mother who was ostracised due to her pregnancy outside of marriage and Joseph was from the small and obscure town of Bethlehem.

Jesus’ birth is so opposite to the pomp and ceremony that surrounds the birth of royals today. Today, when a royal is born, the whole nation is waiting expectantly. Yet here, the King of Kings and Lord of Lords was born quietly in a cave or stable surrounded by animals.

We are currently expecting our third child and I am already thinking about setting up the nursery. I am also being encouraged by my midwife to think about a birth plan. In contrast, Mary had little to no control over the birth of her firstborn. When Mary first found out she was pregnant, her response had been to praise God in Luke 1:48 for looking on her humble estate and choosing her as a mother anyway. Then, as the birth drew near, Mary had to travel 112 km from Nazareth to Judea, which also included climbing a mountain because Bethlehem 809m high (ESV Study Bible).

In our family, my husband David is currently thinking about his responsibility as father to three children and the provisions that will be needed. Once again, in contrast to our modern ways of doing things, Joseph couldn’t  build a nursery- he couldn’t even find a room for them to stay in in Bethlehem.  So, from the beginning, Joseph had little to show or provide for Jesus, the Saviour. God’s choice of humble parents for His Son and orchestration of events that would have made them more humble, is certainly a surprise.

Being born in a humble location, to humbled parents, Jesus was approachable to the lowly. The first visitors we read of at Jesus’ mangerside were the shepherds:

“8 And in the same region there were shepherds out in the field, keeping watch over their flock by night. 9 And an angel of the Lord appeared to them, and the glory of the Lord shone around them, and they were filled with great fear. 10 And the angel said to them, “Fear not, for behold, I bring you good news of great joy that will be for all the people.11 For unto you is born this day in the city of David a Savior, who is Christ the Lord. 12 And this will be a sign for you: you will find a baby wrapped in swaddling cloths and lying in a manger.” 13 And suddenly there was with the angel a multitude of the heavenly host praising God and saying,

14 “Glory to God in the highest,
and on earth peace among those with whom he is pleased!”

15 When the angels went away from them into heaven, the shepherds said to one another, “Let us go over to Bethlehem and see this thing that has happened, which the Lord has made known to us.” 16 And they went with haste and found Mary and Joseph, and the baby lying in a manger.”

Shepherding, in the time of Jesus, was one that had a longstanding profession (think Abel, Jacob, Moses and David), but was also lowly. The career choice meant long periods away from society and an inability to keep the Sabbath (due to the sheep needing around the clock protection). It seems an unlikely mob for the angels to appear to to proclaim the birth of the Saviour. These shepherds had no influence. They weren’t the High Priest or even one of the many other priests, who would have known the prophecies surrounding the birth of the long-awaited Messiah; they were simply shepherds.

But God, in His mercy and planning, shows that the salvation of the world wouldn’t come with majesty and pomposity. His Son would be born in an obscure town, to parents who were lowly and be placed in an animal feeding trough. His first visitors would be the sheep-smelling shepherds from the hills surrounding Bethlehem.

Jesus was and is approachable. At His birth, He was visited by the downtrodden and humble. In growing up, He was the simple son of a carpenter. This week, as we celebrate Christmas, let us celebrate this fact. It isn’t about our pay-check, our status, the amount of pressies under our tree; it is about humbling ourselves before a humble Saviour. We can take comfort and find hope and joy in John 1:12-13:

May we join with the shepherds and respond to Jesus’ birth the way they did: “And the shepherds returned, glorifying and praising God for all they had heard and seen, as it had been told to them.” (Luke 2:20). For this is the Truest and most Precious gift of all- a humble Saviour for humble people who recognise Him as Lord and King Most High.