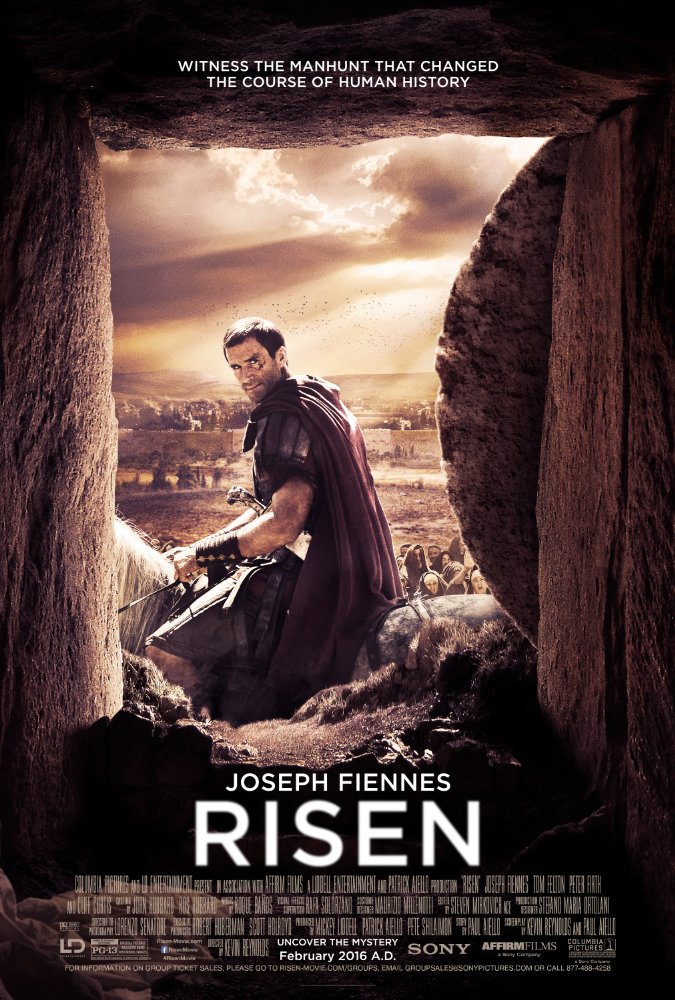 “Risen” is a film released earlier this year and is directed by Kevin Reynolds. Set in AD 33, this film follows the story of Clavius (Joseph Fiennes), a Roman Tribune as he searches for the body of Jesus in order to dispel any notion of a ‘risen Christ’. Beginning immediately after the crucifixion of Jesus, Clavius investigates, with the sole purpose of finding the executed body of Jesus. As the story unfolds, Clavius questions a number of Jesus’ disciples and becomes more intrigued as the body proves a challenge to find. We do need to remember the film is fiction, with a historical backdrop, in order to save confusion for viewers.

I love stories that bring to life and contextualise the scriptures and this film certainly does this. I found it a refreshing perspective and an aspect of the events after the Passion week that we often don’t consider. I found the cinematography, set design and costuming really well done, with the film inviting viewers in to experience life in the time of Jesus.

Acting and script however, let this film down. Joseph Fiennes delivers the standout performance, however he doesn’t have a lot to work with. I felt corny one-liners were dotted throughout the script, with little depth of character development evident. Many questions were raised as to the motivations and authenticity of the main characters, and these questions were never answered. Unfortunately, the weak script was even more obvious as the actors struggled to deliver. A myriad of accents were delivered and at one stage, I even thought I heard an Aussie in the mix.

Bartholomew, played by Stephen Hagan, comes off as somewhat laughable, making viewers wonder if he is high on more than enthusiasm. I also felt featuring Bartholomew as a character an odd choice, when it is extremely well-documented that he was not one of the key disciples.

The character of Jesus, played by Kiwi Cliff Curtis was also underdeveloped. I thought Curtis did an excellent job in the film “Whale Rider”, yet this was polar opposite to his “Hippy” rendition of Jesus.

Tom Felton (think Harry Potter- Draco Malfoy) started to show some depth of character development, however once again, the changing motivations of the character as in the script, caused him to be unbelievable. The notion that a second in command in the Roman army had never seen hand-to-hand combat also seemed extremely unrealistic.

With any Bible-influenced film or book, I set a pretty high bar. Afterall, we are dealing with the Word of God and so if it isn’t done well and hold true to the Bible, I believe it is detrimental to the truth of the Gospel message. It is such a pity, as I was excited about seeing this film, felt it had a strong premise and I actually really wanted it to be done well.

In recent years, with the resurgence of Bible stories entering the secular arena, Christians are flocking in droves to support them- yet I have been wondering if we are too accepting and welcoming of mediocrity. The previews of this film bring to mind the wonder of period films like Gladiator and with amazing films like this sharing a similar backdrop, sadly, “Risen” just didn’t make the cut.

Have you seen the film? I’d love to hear what you thought…