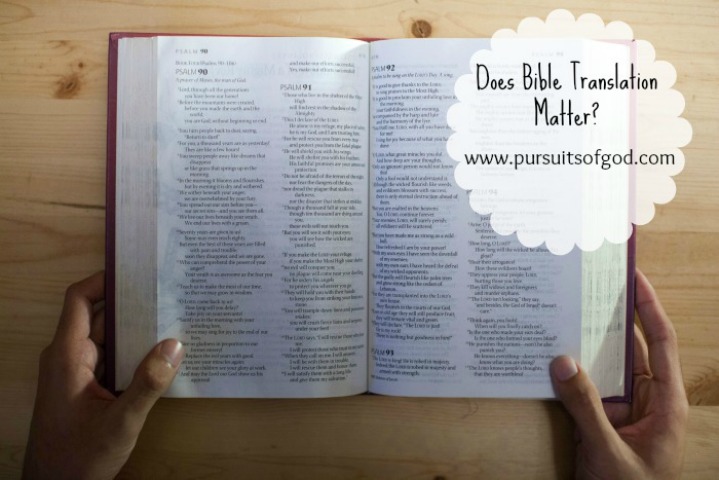 Ever felt overwhelmed as you look for a new Bible in the local Christian bookstore? What version do you buy? Some have a particular advertising feature like a leather cover, devotionals, devotions just for women, a chronological Bible arrangement, application Bibles etc etc. While some of these are added features (such as the Devotionals or a Study Bible that includes study notes and commentary), translations include the likes of NIV, ESV, KJV, NKJV, NLT and even The Message is sometimes lumped in as a translation. So does the translation matter? How did we get the Bible in English today and then how did all the translations come about?

Bruce Metzger categorises ‘Bible translation’ into four major periods (for ease of clarity, I have made five):

Ancient Version of the Old Testament Made for Jews- The Greek Septuagint was the first translation recorded. Here the Old Testament (originally written in Hebrew) was translated into Greek for the Ancient world in the 3rd and 2nd Centuries B.C. The main reason for this translation was that Jewish people who now lived in parts of Greece, had allowed their Hebrew to get rusty (or be forgotten entirely) and they wanted to understand the scriptures that their faith and life was built on. This was why the Greek translation was made. This also meant that when Jesus came (and the disciples went throughout the earth spreading the Gospel), the Old Testament was in the common language of the people: Greek.

Ancient Translations of Part or All of the Bible Mainly for Christians- The second major period of translation involved translating the Bible into Syriac or Latin. As Christianity spread (including into Antioch and further parts of Syria), it was felt that the Scriptures needed to be translated into the native tongue. The Syrian language was similar to Hebrew and Aramaic, yet used different symbols. The first books to be translated were the four Gospels.

More importantly in this period would be Jerome’s Latin Vulgate. Jerome translated the Scriptures and used words such as ‘salvation,’ ‘regeneration,’ ‘justification,’ ‘propitiation,’ ‘reconciliation’ etc that are now common to Christianity. It is thought by the end of the 2nd Century A.D, Old Latin versions of the Scriptures were in circulation in parts of North Africa. The Latin version would not have originated in the Church at Rome, as the official language here was Greek. It is more likely that it came from Latin speaking communities within the early Christian sphere. It appears this version was translated from the Greek Septuagint, rather than the original Hebrew.

The Translation Work of the Reformation– In this period, great reformers translated the Scriptures from the Greek into English (William Tyndale) and German (Martin Luther) in order to get the Bible into the everyday language of the people. The invention of the Printing Press was hugely beneficial in helping the Reformers provide Bibles for the everyman. They set up schools too in order to teach literacy in order for people to learn to read the Bible for themselves. From William Tyndale’s translation came the King James Version (commissioned by King James in 1611), The American Standard Version (1901), The Revised Standard Version (1952 & 1971) and the English Standard Version.

The Great Missionary Endeavour- The third major period of translation occurred as missionaries went out with the Gospel and pioneered translations of the Bible into hundreds of new languages (many of which did not have an alphabet).

The Bible for Newly Developing Nations- This is the translation work that is currently occurring. In the current period of Bible translations, the Scriptures are being translated into languages for newly developing nations by nationals trained in the language. This is important as people who have been trained in translation and are nationals to the country are usually able to translate the Bible with greater accuracy. Currently, there is a translation of the Bible being written in the Aboriginal tongue of the Pitjantjatjara people of Central Australia (Bible Society Article).

So What About Today?

The above information helps us understand how the Bible came to be written in English, but what about all the different English versions? In the English translations, the translators vary in the degree to which they translate word-for-word from the Greek. Some translators, like those involved in the NIV use a degree of paraphrase. While the NIV is the most popular Bible translation sold worldwide, it has come under fire for overuse of paraphrase, rewording and interpretation (Piper).

The problem is, we want to find a version that we can understand, but we also want to know we are reading what the original writers’ intended; for this is the Holy Spirit-inspired Word of God! The Message Bible is purely a paraphrase and so should not be used on a daily study basis as it takes understandability to the extreme, including little actual words that were originally written in the Bible.

So, am I saying we should go back to the King James or even the New King James? No. Versions like the King James and New American Standard Version I find a little awkward and sometimes confusing. Personally, I have chosen to use the ESV because it is a literal translation and is one “that seeks as far as possible to capture the precise wording of the original text and the personal style of each Bible writer.”(ESV) Unlike other versions that approach translation with “thought-for-thought,” the ESV approaches translation with a “word-for-word” approach (ESV).

To help you see for yourself, my beautiful husband (thanks Honey!) put together the following as a reference. The top is the original Greek, and any added words that are not included in the original are underlined in the versions below the chart.

For I am not ashamed of the gospel, for it is the power of God for salvation to everyone who believes, to the Jew first and also to the Greek.

For I am not ashamed of the gospel of Christ: for it is the power of God unto salvation to every one that believeth; to the Jew first, and also to the Greek.

For I am not ashamed of the gospel, because it is the power of God that brings salvation to everyone who believes: first to the Jew, then to the Gentile.

It’s news I’m most proud to proclaim, this extraordinary Message of God’s powerful plan to rescue everyone who trusts him, starting with Jews and then right on to everyone else!

For I am not ashamed of this Good News about Christ. It is God’s powerful method of bringing all who believe it to heaven. This message was preached first to the Jews alone, but now everyone is invited to come to God in this same way.

Hoping this makes things easier when you next go to buy a Bible!