Is that you speaking to me God? 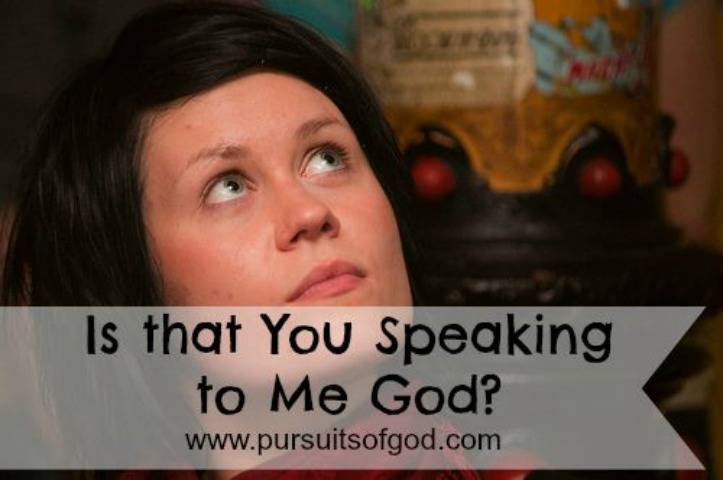 I love the story of Samuel. Perhaps as a mother, I love the thought of Samuel responding so quickly to his mentor Eli, thinking Eli had called for him. Perhaps it is the story of his mother Hannah and her longing and pleading with God for a baby, and then delivering this baby back to God to serve him- what surrender! Or maybe it is because Samuel hears God speak to him in an audible voice- I know I have longed for that. For a refresher, read the story in 1 Samuel 3.

Hearing the audible voice of God is something many people pursue. They long for God to speak and want to learn the ‘skill’ of hearing God’s voice. Many have questioned, does God still speak verbally like he did in the Bible to the prophets? If yes, why hasn’t he spoken to me? If no, why not? Others claim that making a ‘ruling’ on this issue is putting God in a box. So, how do we handle this contentious issue and more importantly, how does the Bible handle this issue? For an excellent article on this, read “The Morning I Heard the Voice of God” by John Piper.

In Timothy Keller’s book Prayer: Experiencing Awe and Intimacy with God (2014), Keller writes of the fact prayer is communication with God and that this involves us talking and listening. Yet, the important point Keller makes is not to seek God speaking outside of his Word (extra-biblical communication). Yes, God did speak audibly to his prophets, but now God speaks through Jesus in the Bible. In Hebrews 1:1-2 we read: “Long ago, at many times and in many ways, God spoke to our fathers by the prophets, but in these last days he has spoken to us by his Son, whom he appointed the heir of all things, through whom also he created the world.” This shows that it is the the Bible, where Jesus life and teaching is documented, that I should expect God to speak to me.

To illustrate the importance of listening to God through his infallible Word, Keller shares the following story:

The eighteenth-century Anglican clergyman George Whitefield was one of the spearheads of the Great Awakening, a period of massive renewal of interest in Christianity across Western societies and a time of significant church growth. Whitefield was a riveting orator and is considered one of the greatest preachers in church history. In late 1743 his first child, a son, was born to he and his wife, Elizabeth. Whitefield has a strong impression that God was telling him the child would grow up to also be a “preacher of the everlasting Gospel.” In view of this divine assurance, he gave his son the name John, after John the Baptist, whose mother was also named Elizabeth. When John Whitefield was born, George baptized his son before a large crowd and preached a sermon on the great works that God would do through his son. He knew that cynics were sneering at his prophecies, but he ignored them.

Then, at just four months old, his son died suddenly of a seizure. The Whitefields were of course grief-stricken, but George was particularly convicted about how wrong he had been to count his inward impulses and intuitions as being essentially equal to God’s Word. He realized he had led his congregation into the same disillusioning mistake. Whitefield had interpreted his own feelings- his understandable and powerful fatherly pride and joy in his son, and his hopes for him- as God speaking to his heart. Not long afterward, he wrote a wrenching prayer for himself, that God would “render this mistaken parent more cautious, more sober-minded, more experienced in Satan’s devices, and consequently more useful in his future labors to the church of God.”

The lesson here is not that God never guides our thoughts or prompts us to choose wise courses of action, but that we cannot be sure he is speaking to us unless we read it in the Scripture.

In this story, I am reminded to not place my promptings and perceived leading of the Holy Spirit above the Word of God, for God’s Word is the only thing that is infallible. When I feel down, I should prayerfully turn to Scripture.When someone tells me they have a Word from God for me, I should take it with caution and test all things by his written Word. When I feel drawn to make certain decisions or take a certain course of action, I should prayerfully turn to Scripture.  And I should expect to find God answer me through his written Word: “For the word of God is alive and active. Sharper than any double-edged sword, it penetrates even to dividing soul and spirit, joints and marrow; it judges the thoughts and attitudes of the heart.” (Hebrews 4:12).