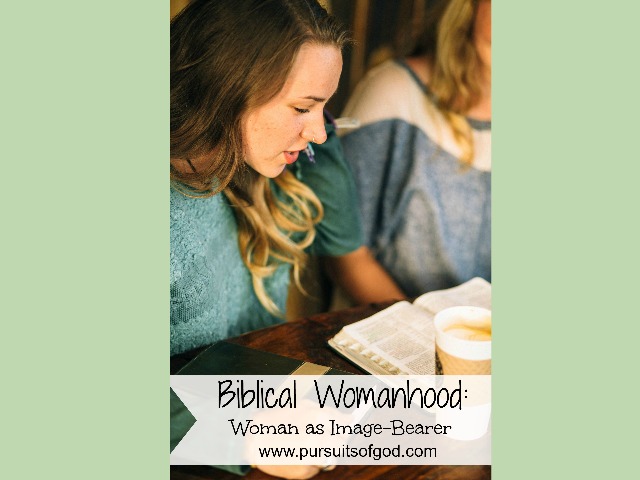 Over the past few weeks I have been reading and talking with women about Biblical Womanhood. It has become really apparent that there are so many differing opinions on this and culture-at-large often influences our views more than we would like it to (and more than it should!). Biblical womanhood can be a confusing topic and one we often reduce to specifics- should I work or stay home? should I be single or married? should I choose to be a teacher or a police officer? But Biblical womanhood is so much bigger than our circumstances, our season or our profession. Over the next few posts, I am going to look at the basics of Biblical womanhood in order for us to learn more about Who God is and who He has created us to be.

In order to look at Biblical womanhood, firstly we must go back to the beginning. In Genesis Chapter 1, we read that God created man:

“Then God said, “Let us make man in our image, after our likeness. And let them have dominion over the fish of the sea and over the birds of the heavens and over the livestock and over all the earth and over every creeping thing that creeps on the earth.” So God created man in his own image, in the image of God he created him; male and female he created them.” (Genesis 1:26).

Here, we find out that God created humanity as His image-bearers and in His likeness in order to have dominion over the rest of creation.

Mankind as image-bearer of God is a key belief of Christianity and must be foundational in looking at Biblical womanhood. It informs everything- our belief in life from conception, our value of humanity, our love and respect for others- even when their opinions differ to ours. God purposefully made mankind to be like Him. Why would God do this? Why would He create people to mirror Him? In an image-obsessed world, this belief in being designed in the image of God, causes us to look up to Him, rather than simply looking at ourselves. It also gives our life meaning and purpose and gives us a reason for living. When we forget or forget to acknowledge that we are fashioned in the image of God, we live confused lives, without a compass or firm foundation for our life. Being image-bearers of God is an essential starting point in looking at who we are as people and more particularly, who we are as women.

Somedays, I question how glorious this body is that I have. There are things I wish I could change and there are things that simply don’t look the way they once did. But being an image-bearer is so much more than my external appearance. Douglas Kelly says, “the ‘likeness or image’ of God bears the idea of mind, will, affections, and especially relationship with other similar persons”.[1] In mirroring God, we glorify Him through our desire to learn, think, reason, in the way that we experience emotion and love others and in our desire for relationship with God, with others and with the rest of creation.

So the Lord God caused a deep sleep to fall upon the man, and while he slept took one of his ribs and closed up its place with flesh. 22 And the rib that the Lord God had taken from the man he made into a woman and brought her to the man. 23 Then the man said,

In these verses, we see that the creation of Eve was intentional and artistry in motion. While I may look at my body and realise I am proof of living in a sinful world, where things aren’t perfect and bodies don’t look or always work the way we want them to, Eve’s body was perfect. She existed in a sinless world for a time and her body would have been a product of being carefully designed and constructed by God (the Hebrew actually means God built Eve). Her body and personhood made Adam launch into poetry, showing she was something fairly spectacular.

While we may wonder at what Eve looked like, the absence of a description of her appearance shows us that God’s purpose for Eve and womanhood goes above and beyond our appearance. Eve was equal to Adam- she was made in his exact essence or nature:

“She [Eve] was in no way an inferior character made merely to serve [Adam], but she was his spiritual counterpart, his intellectual coequal, and in every sense his perfect mate and companion”[2]

As image-bearers we are to embrace who we are created to be. As women we are created with the capacity to think, to love, to create, to communicate and so much more! In using the God-given gifts and abilities we have, and the things that make us uniquely us, we can reflect God, for this is what a true image-bearer is.

“As we faithfully and humbly offer ourselves in service to God and others, the result is that He is more fully represented to the world, His kingdom work is being accomplished, and His name is greatly praised.”[3]

Being an image-bearer means pointing to the One in whose image we are made and this is the purpose of mankind; if people only marvel at the bearer of the image, rather than the Image itself, they have truly missed out.

[2] John MacArthur, Twelve Extraordinary Women: How God Shaped Women of the Bible and What He Wants to Do With You (Thomas Nelson, 2005), p.5.