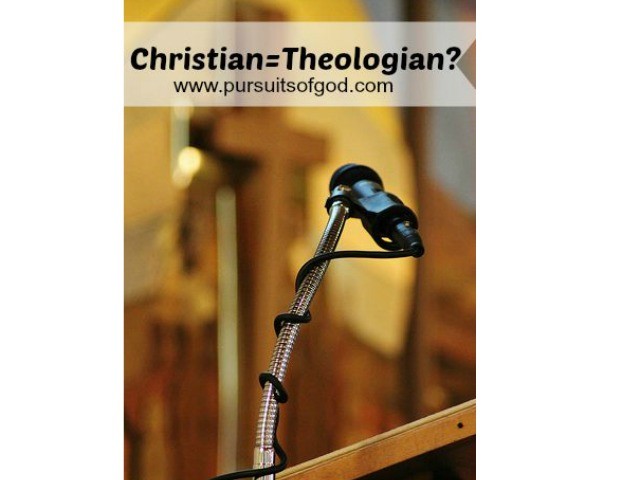 “How think you that you obey Christ’s commandments, when you spend your time collecting interest, piling up loans, buying slaves like livestock, and merging business with business? … And that is not all. Upon all this you heap injustice, taking possession of lands and houses, and multiplying poverty and hunger.”

If you are a Christian- a follower of Jesus- you are a theologian. Does that surprise you? I think so often the term ‘theologian’ carries with it this idea of a stately office, filled with concordances and theological books, and the person behind the desk having an answer to any possible Bible-related question. While this stereotype may have come to your mind too, it couldn’t be further from the truth. Graeme Goldsworthy says, ” Theology is the word we use to refer to what we know about God. It can be used in a number of distinct though related ways. It does not have to be complicated. We can use the word to refer to every Christian’s knowledge of God (Theos= God, logos= word, knowledge).” (1991, p.29). When thinking about theology, it is important to remember that what we know about God is because he has revealed himself to us. He has given us his Word that reveals who he is and then gifted us with his Spirit to help us understand this revelation of himself in Scripture.

In the first few centuries of Christianity, followers of Jesus were plagued with persecution. A Christian was greatly aware that at any time they could be taken before Roman authorities and sentenced to death. In amongst this persecution, there was also great philosophising and debate. Secular writer Celsus complained that “Christians were ignorant folk whose teaching took place, not in schools nor in open forums, but in kitchens, shops and tanneries” (in Gonzalez, 2010, p.105). While there were many great Christian intellects who taught and debated Christianity, on the whole this criticism against Christianity was true (Gonzalez, 2010). Jesus spent time with the poor and lowly (as seen through the Gospels) and recent sociological studies have confirmed that the majority of Christians in the first three centuries were from the lower classes (Gonzalez, 2010). 1 Corinthians 1:26-27 supports this sociological finding:

While the majority of Christians may have been from the lower classes, history tells us that there arose a variety of different preachers who impacted the Church and faithfully taught all people, no matter their class, the Scriptures.

John Chrysostom was one such man. Starting out as a lawyer trained in Antioch, Chrysostom became the Bishop of Constantinople in the Fourth and Fifth Centuries. Born to a possessive but passionately Christian mother, Chrysostom came to know and love Jesus. He went on to be baptised and after his mother’s death, became free to become a monk. After 6 years of living the monk life, he re-entered society and was made a deacon and later a presbyter. In these roles, Chrysostom began preaching and his fame spread through the Greek church. 100 years after his death, Chrysostom was given the title, ‘The Golden-Mouthed”, pointing out he was “a giant above the giants of his time” (Gonzalez, 2010, p.225).

In 397, the prestigious position of Constantinople Bishop became available. Chrysostom’s fame in Antioch however, had meant that the emperor was concerned about making Chrysostom the Bishop. Instead, they devised a plan to kidnap Chrysostom and swear him in as Bishop before anyone could really do anything about it. Constantinople was a rich and prosperous city and known for it’s excesses and intrigue (a bit like today if you watch the latest political updates and accompanying advertisements). Chrysostom was still a monk and so couldn’t stand the luxury and over-indulgence of those residing in Constantinople.

John Chrysostom brought great reform to the Constantinople church. He went about reforming the clergy and members of the Greek church, urging them to “lead lives more in accordance with gospel mandates” (Gonzalez, 2010, p.228). As Chrysostom boomed one day from the pulpit:

“The gold bit on your horse, the gold circlet on the wrist of your slave, the gilding on your shoes, mean that you are robbing the orphan and starving the widow. When you have passed away, each passer-by who looks upon your great mansion will say, “How many tears did it take to build that mansion; how many orphans were stripped; how many widows wronged; how many labourers deprived of their honest wages?” Even death itself will not deliver you from your accusers.”

Obviously, Chrysostom had his fair share of critics. As Chrysostom’s power grew and his passion against excess more widely known, relationships with other powerful leaders at the time became tense. Eudoxia, the Roman emperor’s wife, was one such person and she actively sought to meddle with church management and preaching. In the end, under her influence Chrysostom was exiled, yet during this last stage of his life, he started writing down his theology (remember- knowledge of God).

Whether you are a brilliant orator or not is beside the point. The first few centuries of the Christian church show us that God raises up teachers, to instruct people on the truths of his Word, but he also provides access through his Word for you to grow in your individual and personal knowledge of God. In a beautiful summation of Chrysostom’s life, Gonzalez writes, “But for John Chrysostom the pulpit was not simply  a podium from which to deliver brilliant pieces of oratory. It was rather the verbal expression of his entire life, his battlefield against the power of evil, an unavoidable calling that eventually led to exile and to death itself.” (2010, p.225). It makes one stop and think- will I be remembered for pursuing God and growing in my knowledge of who God is as revealed through his Word, or will I be remembered for materialistic whims that are here today and gone tomorrow (or even for trying to meddle in the Church like Eudoxia). Let us encourage one another to embrace being theologians, recognising that God has equipped us with his Word and Spirit.

“His divine power has granted to us all things that pertain to life and godliness, through the knowledge of him who called us to his own glory and excellence, by which he has granted to us his precious and very great promises, so that through them you may become partakers of the divine nature, having escaped from the corruption that is in the world because of sinful desire. For this very reason, make every effort to supplement your faith with virtue, and virtue with knowledge, and knowledge with self-control, and self-control with steadfastness, and steadfastness with godliness, and godliness with brotherly affection, and brotherly affection with love. For if these qualities are yours and are increasing, they keep you from being ineffective or unfruitful in the knowledge of our Lord Jesus Christ. For whoever lacks these qualities is so nearsighted that he is blind, having forgotten that he was cleansed from his former sins. Therefore, brothers, be all the more diligent to confirm your calling and election, for if you practice these qualities you will never fall. For in this way there will be richly provided for you an entrance into the eternal kingdom of our Lord and Savior Jesus Christ.” – 2 Peter 1:3-11

photo credit: A Word from the Cross via photopin (license)

Gonzalez, J.L. (2010). The Story of Christianity. Volume 1: The Early Church to the Dawn of the Reformation. New York: Harper Collin