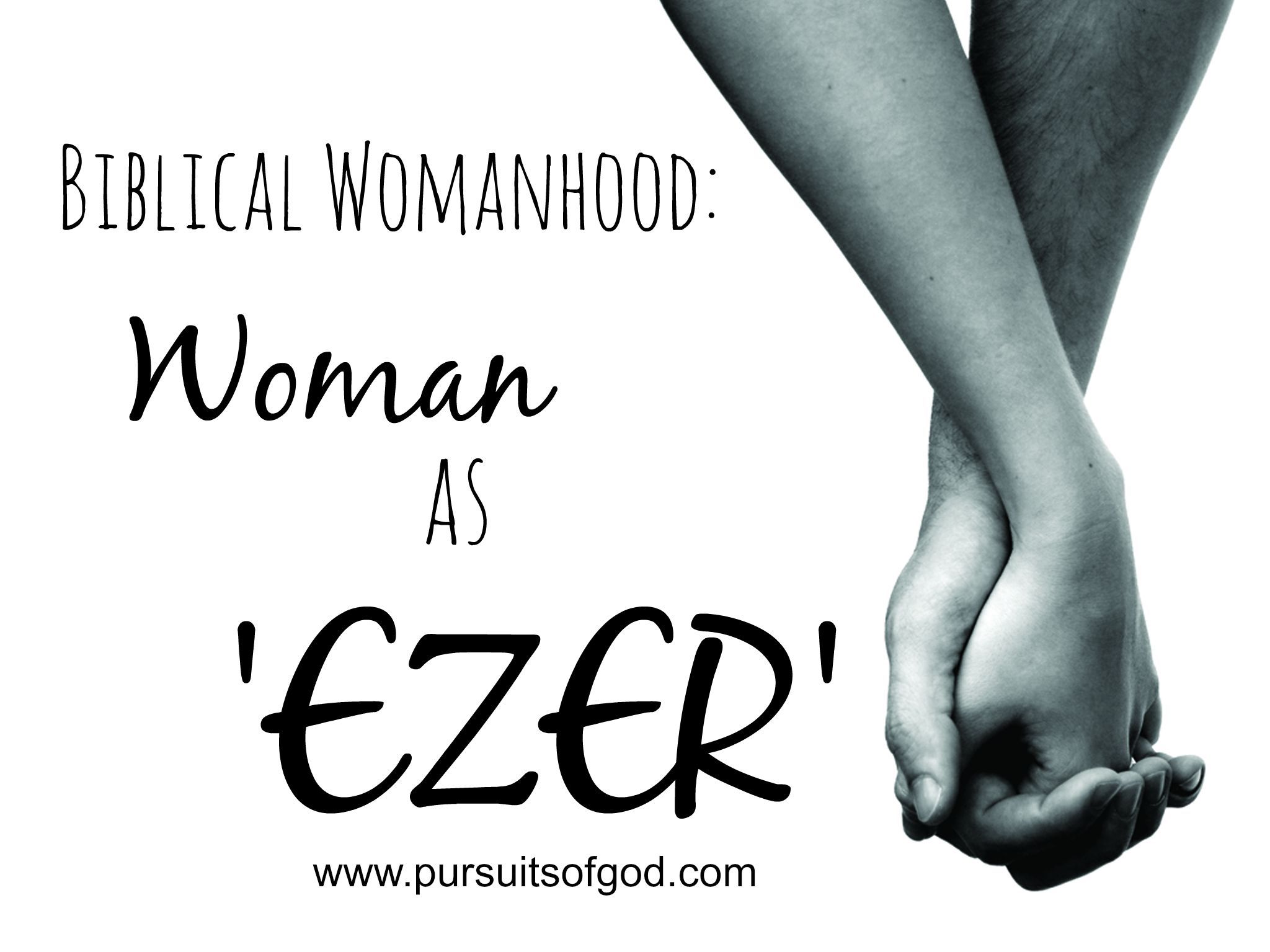 I don’t know about you, but often I feel inferior or weak if I need to ask for help. I like being self-sufficient and actually find some sense of worth in being able to do things myself. Funnily enough, in God’s sovereign design and humour, He has blessed me with a daughter who also has this character trait. My little Miss 3 1/2 loves doing things herself and exerting her independence- from dressing herself, to the latest pursuit of tying ribbons, she prefers to be able to complete a task by herself. As I watch her, I often think about how similar I am. Some independence is great, but when we reach a point where we believe needing help is a sign of weakness, we have distorted God’s plan for our need for relationship and working together. In Ecclesiastes 4:9-10, we read:

Two are better than one, because they have a good reward for their toil. 10 For if they fall, one will lift up his fellow. But woe to him who is alone when he falls and has not another to lift him up!

Did you catch what Solomon wrote- “woe to him who is alone when he falls….”

As women, we are designed in the image of God and our purpose is to mirror Him to those around us. The second aspect of womanhood that we see in the Genesis account of creation is that woman was also created to be a helper to her husband (in Hebrew, this word is ezer).  As Courtney Reissig writes, “Today, this concept [of helper] is often viewed as controversial or demeaning- as if a helper were someone of unequal value. But our idea of a “helper” does not necessarily line up with God’s idea of a helper” (in The Accidental Feminist, 2015, p.34)

God had a different plan and saw a helper as something valuable that was needed in His creation. Up until the moment before God created woman, everything had been good- the trees had been good, the seas had been good and Adam in the world was good. But in Genesis 2:18, God declares:“It is not good that the man should be alone; I will make him a helper fit for him.” As Adam set about his task of naming everything, it became apparent that there was no helper or companion of the same type as Adam: “The man gave names to all livestock and to the birds of the heavens and to every beast of the field. But for Adam there was not found a helper fit for him.” (Genesis 2:20) So what does God do? God made woman:

So the Lord God caused a deep sleep to fall upon the man, and while he slept took one of his ribs and closed up its place with flesh. 22 And the rib that the Lord God had taken from the man he made into a woman and brought her to the man. 23 Then the man said,

Man’s life was lacking without woman, so God created woman to rectify this. It wasn’t an issue of worth, it was an issue of need- together they would complete God’s creation, they would be equal but different. As God looked out on His creation, one that included man with his helper- the woman, his wife, “Behold, it was very good” (Genesis 1:31b).

The Hebrew phrase used here to describe woman as ‘helper’, is ezer kenegdo and this phrase teaches us a lot. Chrystie Cole defines this further:

“… in Hebrew, the word ezer actually indicates an inherent strength. An ezer is an ally, an aid, someone who brings support and relief. The adjoining word kenegdo means “corresponding to,” “opposite to,” or “suitable to.” So joined together, the phrase ezer kenegdo is more accurately translated as “corresponding strength,” “essential counterpart,” or “indispensable companion.”

in Becoming Magazine: As Christ is Formed in Us, Vol. 1: Identity

Recently, this idea of ‘helper’ has come under some dispute within complementarian circles. Simply put, complementarianism is the theological belief that woman and men are created equal yet with different roles (a great explanation provided on the Council for Biblical Manhood and Womanhood). In particular, the office of the elder who teaches from the pulpit and the body of elders who hold the preacher/office of teaching accountable for the church, is restricted to men (1 Timothy 2:11-12, Titus 1:5-7, 1 Timothy 3:1-3). In the complementary view, being a helper is a wonderful thing and allows both men and women to flourish within their differing roles. Yet recently the dispute has arisen as to whether the woman is helper to her husband, or helper to all men. In August, John Piper released some comments expressing that he believed all women are given to be helpers to men, meaning that women are not to hold authority over them in any sphere of influence (such as being a police officer or in authority of a man). Respectfully to John Piper, I, like other women (see Aimee Byrd and Wendy Horger Alsup) see this role of ‘helper’ being played out in the particular context of marriage.

Let me clarify: in Genesis, we read that it was not good for man to be alone, so God created woman to be man’s ezer to help and support him in his role. Then God gave Eve to Adam as his wife:

22 And the rib that the Lord God had taken from the man he made into a woman and brought her to the man. 23 Then the man said,

24 Therefore a man shall leave his father and his mother and hold fast to his wife, and they shall become one flesh. 25 And the man and his wife were both naked and were not ashamed.

This role of helper applied to a wife (Eve) for her husband (Adam), not to woman for all men. Likewise, as part of the curse, God explains to Eve that “your desire shall be for your husband, and he shall rule over you.” (Genesis 3:16b, underline added). This shows that as women, we will struggle to submit to our husbands as a product of living in a fallen world, yet as we are transformed by the Holy Spirit from glory to glory, we will grow more submissive to our husbands. Why? Because it is God-ordained and reflected throughout the Bible in a particularly important model! Jesus, in descending to earth, dying our death and rising to conquer the grave, was submissive to His Father (Matthew 26:39, John 6:38, 1 Corinthians 15:28). Also, the Church submits to Christ as the Head of the Church. Within marriage, the husband is head of the marriage and family is to love his wife, as Christ loves the Church (Ephesians 5:25). The wife is to submit to her husband, as Christ submits to the Father (Ephesians 5:22, 24).  Submission and being a helper to our husbands is not a sign of weakness, submission brings strength. As a wife submits to her husband and helps him, and a husband loves his wife, God is glorified and His gospel can be proclaimed.

When it comes to supporting and helping our husbands, it means thinking carefully about the ways we may help our husband. He is different to our best-friend’s husband or the next-door neighbour, and so we need to be a helper to the one we were designed to partner. In our culture of comparison, it is easy to look at the woman next to us and see the way she helps her husband and think we too need to mirror her. Yes, there are ways that we can learn from each other and this is biblical (Titus 2:3-5), but to simply use a blanket approach is not. “I am called to develop and implement my giftedness for the good of my husband, so God gets the glory” (Resissig, The Accidental Feminist, 2015, p.36). As we seek to help our husbands, with the aim of glorifying God, we can find great joy in living out biblical womanhood. As our husbands love us as their own bodies (Ephesians 5:28), they too will find great joy. In partnership, we can find great strength and blessing.

So what about single women? Courtney Reissig (The Accidental Feminist, 2015) would argue that women, as helpers, should be helpers to any people, including the Church and in their workplace (pp.35-36). Here, I would argue that being a woman doesn’t make one a helper, being a wife does. As Christians, regardless of our gender, we should all be trying to help others in order to glorify God and build His Church. The principle of men and women practicing hospitality is an example of showing love in action through service (Romans 12:13) and in Philippians 2:5-9, we are admonished to serve others as Jesus Christ did. Many women I talk to are struggling with singleness- they don’t see it as a gift, they see it as a time of painful ‘waiting’. Whether God, in His sovereignty has ordained you to be a wife or not, you too can use all your gifts for God’s glory.  This is exemplified by woman of the Bible who faithfully used their gifts for the Church. As Wendy Horger Alsup writes:

This may be painful to hear if you are single, widowed, or divorced. But you too are God’s strong helper though you do not have a particular man to whom to direct it. Throughout Scripture, women helped. Ruth helped Naomi. Mary helped Jesus. Phoebe helped Paul. Lois and Eunice helped Timothy. Yet, I do not trivialize the reality in which you find yourself. As God said in the garden and you well know by your own life experience, it is not good for man (or woman) to be alone. If you find yourself in this state of aloneness that God declared “not good,” you are in good, godly company.

Whatever your marriage status, we can encourage one another to live out gospel-centred womanhood in our lives. As a wife to David, I am a helper to him. As a mother to two littlies, I am a teacher for them. As a member of a women’s Bible study, I can share my growing theology (knowledge of God). As a member of a local body of believers, I am in submission to my elders and able to use my gifts biblically to serve. As a follower of Jesus, I am to share the gospel with others, through helping them, through supporting them and through proclaiming God’s glorious message of grace.

Just as God was described as an ezer for Israel (Ex. 18:4, Ps 33:20; 70:5; 115:9-10) so too we are to embrace our role as ezer as a way of mirroring Him and bringing glory to His name. As we are bearers of His image, we can provide help and support to those around us, equipped with the goodness of His Word and empowered by the strength of His Spirit.