Augustine: One of the Most Influential Figures In Early Christian History 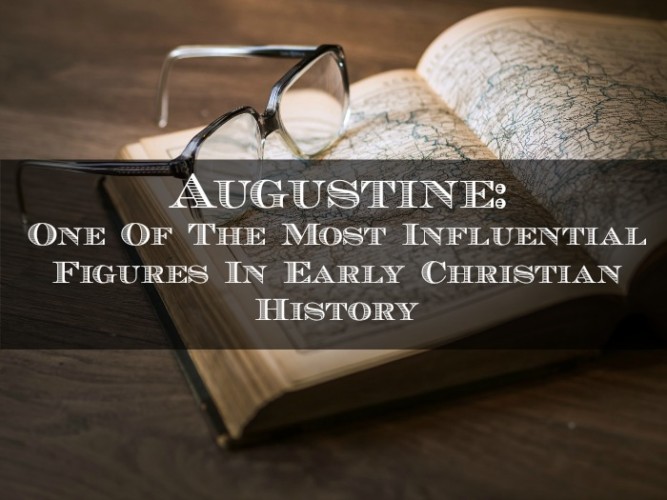 I love history. Finding out about people who have lived before us and times past, fascinates me. I marvel at the process of knowledge being passed through the generations, and how one person imparts knowledge to another. As someone who delights over written words, the fact God chose to impart knowledge through oral tradition first, and then through the writings in his word, is something that I savour.

Back in 354 AD, in a small town in North Africa, Augustine was born to a Roman pagan father and a devout Christian mother. From an early age, Augustine’s intellectual gifting was apparent. His parents sought the best education for him and until their money ran out, he was sent away to school. When he was 17, Augustine, under a generous benefactor, was sent to Carthage, the cultural hub of Latin-speaking Africa at the time, to further his studies.

While studying, Augustine pursued rhetoric, or the art of speaking and writing in a persuasive way. As he studied the masters, particularly the famous classical Roman orator Cicero, Augustine came to have a thirst for truth, as he felt being able to speak ‘correctly’ was not sufficient if you weren’t saying anything of importance. Augustine pursued pleasure and in the process had a child to a concubine. He also investigated religions of the time and dabbled in a variety of them.

Augustine had two struggles with Christianity. Firstly, that the writings in the Bible were fairly undisciplined in style and construction. He also struggled over the idea of evil- if God was good, why was there evil. Augustine became a teacher and was schooled in theology . In his studies of religion, he came to see that evil wasn’t a created ‘thing’, it was a moving away from the One God; an absence of God and his goodness if you like. This answered his struggle with the notion of evil.

When Augustine came to address the lack of style and finesse in sermons and the crude language and violence contained in the Bible, his mother encouraged him to listen to a bishop of the time, Ambrose. Over time, Augustine came to hear Ambrose’s solid explanations of the more difficult passages. Augustine could find no fault with Ambrose and came to appreciate the Bible as his understanding of it grew.

Augustine had felt that if he were to become a Christian, he would have to fully devote himself to it, giving up his career, his ambitions and his pleasures. This conviction proved a struggle for Augustine. In time though, Augustine came to know and follow Christ. He was then baptised, he resigned from his teaching. He also set up a community where residents sought an ordered life, spending time in prayer, study and meditation. This was what he committed himself to doing for the rest of his life. Unbeknownst to him, his days in quiet meditation were numbered.

In 391, Augustine went to Hippo, to try and convince a friend to join his community. While attending a church there, the bishop preached a sermon on how God provided shepherds for his flock. The bishop then asked if the congregation felt there was a shepherd for them in that very church service. In response, the congregation ordained Augustine against his will. Four years later they promoted him to bishop in fear that another congregation would try to steal him. While bishop, Augustine of Hippo wrote the works that would lead to him being given the title of the most influential theologian in the entire Latin-speaking church since New Testament times.

The thing I love about the story of Augustine is the reminder it is of God providence: God is in the business of working out his plans. Like Augustine, I often have things mapped out, with a set of preconceived ideals or goals for my life. Yet gently, as God leads and guides, he takes me down a path that I often do not expect, nor want at the time, to bring about his purposes in and through me. God used Augustine- all of him- Augustine’s delight in the art of speaking and argument, Augustine’s training and experience as a teacher and even Augustine’s struggles, to make him one of the greatest theologians we know. His teachings were often referenced in the Reformation and his collection of theological writing is still studied and referred to today. Thank goodness God works out his purposes for our lives and that he is not limited to our often limited minds.