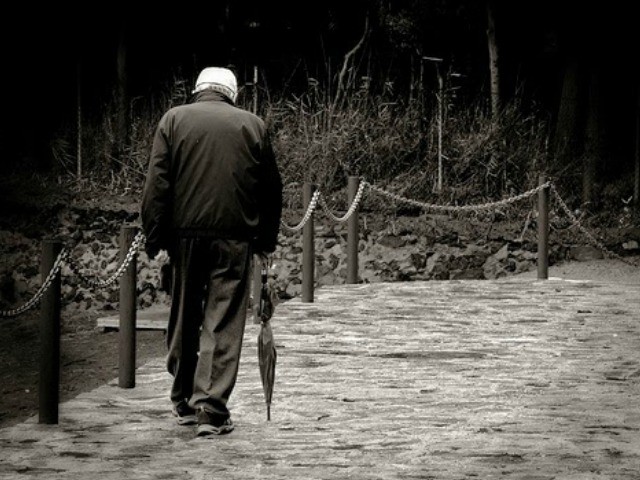 “86 years have I have served him, and he has done me no wrong. How can I blaspheme my King and my Saviour?”

Polycarp’s Martyrdom (ca. 69-ca. 155)
I like to people watch when I get the chance- watching an expression cross a person’s face, viewing a film that poignantly speaks of this thing we call ‘life’, sinking my teeth into a book with strong characters. All these opportunities give me time to pause and consider the millions of people living across this earth and the different lives they live. These days, I am usually found watching my two little children and marvelling at God’s handiwork in their lives. I also wonder about who they will grow to be.  My almost 3 year old daughter is becoming more aware of the concept of ‘time’ in life. Her birthday is rapidly approaching and her mind is taking in what a birthday actually is and what it means to get a year older. The other day after running into an elderly friend, my little lady looked at my and stated most emphatically, “I don’t think G- is a baby”. I concurred with a smile: It had been 70 or so years since our dear family friend had been a baby! Age is such an interesting thing for a small child to understand. This made me think- how do I want to look back on these years I am to live? I hope that if I reach 70+ years on this earth, I may be lots wiser, more patient and more in love with our Precious Saviour Jesus!Polycarp, is one of the earliest martyrs we have documented eye-witness accounts of outside the New Testament. At 86 years of age, I would also make a guess that he is perhaps one of the oldest. He is thought of to be the last surviving Christian who learnt directly from the Apostle John and was a leader of the Church in Smyrna. In the account below, we read of his courageous martyr:

“In the popular mind, the early church was above all else a noble army of martyrs. In many ways it was, and none was more noble than Polycarp, the aged bishop of Smyrna in western Asia Minor.The authorities brought the highly respected pastor into the crowded arena, prepared to shove him to the lions- but only reluctantly. They much preferred a denial of the charge against him. He was a Christian.“Simply swear by Caesar,” the governor pled.“I am a Christian,” said Polycarp. “If you want to know what that is, set a day and listen.”“Persuade the people,” answered the governor. Polycarp said, “I would explain to you, but not to them”“Then I’ll throw you to the beasts.”“Bring on your beasts,” said Polycarp.“If you scorn the beasts, I’ll have you burned.”“You try to frighten me with the fire that burns for an hour, and you forget the fire of hell that never goes out.”The governor called to the people, “Polycarp says he is a Christian.” Then the mob let loose. “This is the teacher of Asia,” they shouted, “the father of the Christians, the destroyer of our gods.”So Polycarp, praying that his death would be an acceptable sacrifice, was burned at the stake.The scene is real. It did happen.”– Excerpt from B. L. Shelley1

In another account, when Polycarp was told if he recanted he would have his life spared, he replied, “For eighty-six years I have served him, and he has done me no evil. How could I curse my king, who saved me?”2. As he was tied to the stake, we read “… he looked up and prayed out loud: “Lord Sovereign God … I thank you that you have deemed me worthy of this moment, so that, jointly with your martyrs, I may have a share in the cup of Christ… For this… I bless and glorify you. Amen.”3
As I imagine myself a silent “people watcher” of this man Polycarp, I am amazed at the strength his faith and God gave him. I imagine the lines of laughter etched around his mouth, the wisdom of age showing in his hair, the slight stoop signalling a long-lived life. Yet this man is not telling a story to a grandchild sitting on his knee, he is standing in front of an angry mob, who are calling for his excruciating death. Polycarp considers the opinion of his Saviour King higher than that of the people in front of him. With assurance of his salvation (1 John 5:11-13), he considers it an honour to be martyred alongside Christ. Not only does he not waver in his faith, he so greatly comprehends God’s richness of grace (Ephesians 2:1-7) that Polycarp asks for an opportunity to share his faith with the governor.
How quick I am to miss an opportunity to share my love for Jesus with a friend, fearing their response! How often I think more highly of other people’s opinions over that of my Saviour! I so easily lose sight of the temporal nature of this world, getting caught up in the day to day and forget that eternity is just around the corner. In these moments, may I remember Paul’s example, “Indeed, I count everything as loss because of the surpassing worth of knowing Christ Jesus my Lord. For his sake I have suffered the loss of all things and count them as rubbish, in order that I may gain Christ and be found in him, not having a righteousness of my own that comes from the law, but that which comes through faith in Christ, the righteousness from God that depends on faith— that I may know him and the power of his resurrection, and may share his sufferings, becoming like him in his death, that by any means possible I may attain the resurrection from the dead.” Ephesians 3:8-11.